WHAT IS CHAKRA ? INTRODUCTION OF CHAKRA

The first chakra is the root chakra, called Muladhara in Sanskrit. The root chakra is believed to be located at the base of the spine at the tailbone in back, and the pubic bone in front which primarily consist of Perineum area.  The root chakra is closely related to one’s contact with the Mother Earth, improving our ability to be grounded into the earth plane. Muladhara is also the center of manifestation. When you are trying to achieve something in the material world, business or possessions, the energy to succeed is supposed to come from the first chakra. If this base chakra is blocked, an individual may feel fearful, anxious, insecure and frustrated.
A man’s sexual organs are located primarily in his first chakra, so male sexual energy is usually experienced primarily as physical. A women’s sexual organs are primarily in her second chakra, so female sexual energy is usually experienced primarily as emotional. Both chakras are associated with sexual energy.

When Root Is Blocked

When the root chakra is blocked we often become spacey, frustrated with our work, and feel physical pain in our feet, knees, legs, hips and lower back.

Sexual drive is often extremely low or non existent as well and lack of self confidence is also commonly associated to a blocked or unhealthy root chakra.

If you are feeling pain the lower extremities of your body this is usually a sign of root chakra blockage as it signifies you are not accessing the earths energy.

Concentrating on any one thing or performing mundane tasks such as balancing your checkbook are difficult and are often put off until the last possible moment.

Feeling of spaciness or being easily distracted is a sign of not being connected to the earths energy.

Constant worry and stress over your financial situation or sense of security with home and work is a symptom of root chakra blockage.

How To Healing The Root

Exercise,
Enjoy your physical body; walk, run, dance,
Do yoga,
Play sports, stretch.
By utilizing our bodies in a physical way
we are allowing the energy to flow through and into us through our root chakra. This does not mean over exerting or exhausting yourself but partaking in any physical activity helps, it is a way of showing gratitude for our bodies.

The next chakra or second chakra is the Svadhisthana – often referred to as the sacral. It is located two inches below the navel around area of Clitoris in women/ Base of Penis in men). This chakra is believed to hold the basic needs for sexuality, creativity, intuition, and self-worth. It also denotes friendliness, creativity, and emotions. It is also believed to govern a person’s  sense of self-worth, his/her confidence in his/her own creativity, and his/her ability to relate to others in a friendly way.

Lower back pain, constipation or even sexual type diseases.

The third chakra is called Manipura (in Sanskrit) – also referred to as the Solar Plexus Chakra in English. It is located in the navel area. The Manipura chakra is considered as the center of personal power, the place of ego, of passions, impulses, anger and strength. It is also considered the center for astral travel and astral influences, receptivity of spirit guides and for psychic development. When the Third Chakra is out of balance you may lack confidence, be confused, worry about what others think, feel that others are controlling your life, and may be depressed.

The fourth chakra is the Heart (Anahata) chakra.It is located in the central of the spine near the heart, with its exact location between the center of two breasts. This Chakra is the center for love, compassion and spirituality. It directs one’s ability to love themselves and others, to give and to receive love. This is also the chakra connecting body and mind with spirit. When this chakra is out of balance you may feel sorry for yourself, paranoid, indecisive, afraid of letting go, afraid of getting hurt, or unworthy of love.

The fifth chakra is the Throat Chakra also known as Vishuddhi Chakra in Sanskrit. It is located at the throat and is the center of communication, sounds, and expression of creativity via thought , speech, and writing. The possibility for change, transformation and healing in a person are located here. When this chakra is out of balance you may want to hold back, feel timid, be quiet, feel weak, or can’t express your thoughts.

The sixth chakra is referred to as the Third Eye Chakra. In Sanskrit it is known as Aagya Chakra i,e. Command wheel. It is located above the area of physical eyes on the center of the forehead. This is the center for psychic ability, higher intuition, the energies of spirit and light. It also assists in the purification of negative tendencies and in the elimination of selfish attitudes. Through the power of the sixth chakra, one can receive guidance, channel, and tune into your Higher Self. When this chakra is not balanced you may feel non-assertive, afraid of success, or go the opposite way and be egotistical. Please also read Third Eye Meditation.

The seventh chakra is referred to as the Crown.
It is the upper terminal point of the central channel (sushumna-nadi) and the final destination for the awakened serpent-power (kundalini-shakti). When the kundalini, the force of Devi, reaches this center, this signals the merging of Shiva and Shakti.
It is the center of spirituality, enlightenment, dynamic thought and energy. It allows for the inward flow of wisdom, and brings the gift of cosmic consciousness. This is also the center of connectedness with the Goddess (God), the place where life animates the physical body. The silver cord that connects the aura bodies extends from the crown. The soul comes into the body through the crown at birth and leaves from the crown at death. When this chakra is unbalanced there may be a constant sense of frustration, no spark of joy, and destructive feelings. Illnesses may include migraine headaches and depression. Balanced energy in this chakra may include the ability to open up to the Divine and total access to the unconscious and subconscious.


Showing posts with label WHAT IS CHAKRA ? INTRODUCTION OF CHAKRA. Show all posts
​ 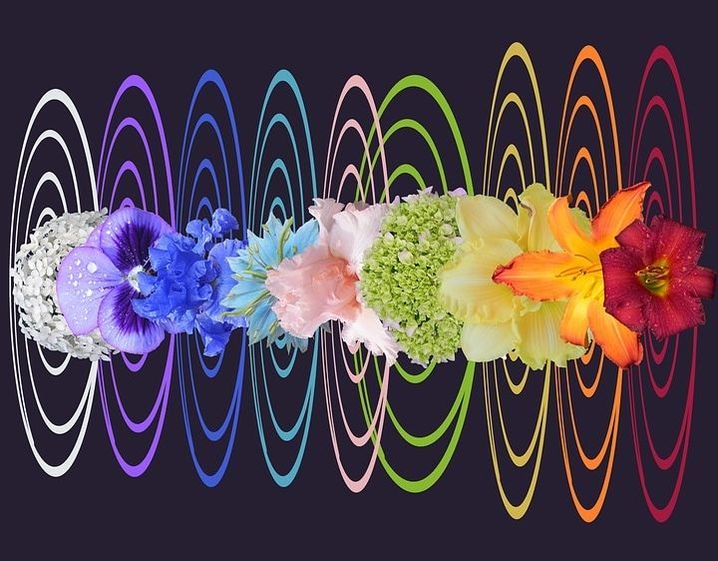